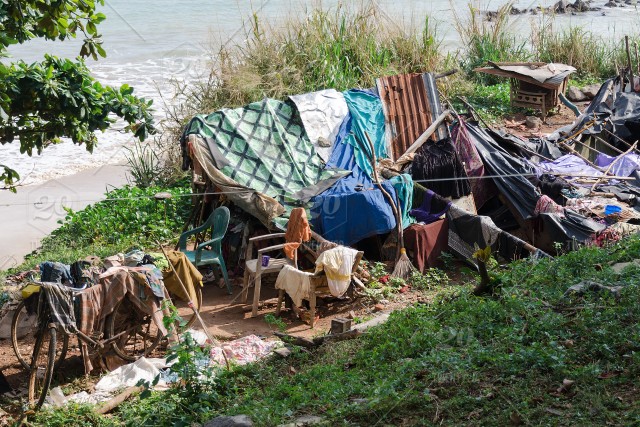 Poverty is not genetically transmitted, nor a cosmic destiny imposed on people, regions, or countries. However, we have long known that traditional strategies to combat social exclusion, well-intentioned as they are, do not offer lasting results, nor do they tend to be of significant scope. It is therefore advisable to pay attention to those contributions capable of suggesting other approaches.

Aside from the obvious difficulties of overcoming a status quo based on long-established political and economic relations between countries, recent research provides a revealing new perspective: poverty feeds itself. The psychological burden derived from living in a context of scarcity affects the human brain, producing a cognitive deterioration that translates into worse life decisions and, consequently, in a perpetuation of the state of poverty.

Dave Nussbaum, in his blog on social psychology Random Assignment, perfectly sums up the gist of this study:

“One of the obstacles preventing the poor from overcoming poverty is the tendency to make costly financial decisions – like buying lottery tickets, borrowing at high rates, not enrolling in welfare programs – they only make your situation worse. In the past, these poor decisions have been attributed to the personality of low-income citizens or the environment in which they live, with little access to education and substandard living conditions. Research published in Science by Behavioral Sciences professor Anuj Shah offers a new answer: living with scarcity changes people’s psychology. When resources are scarce – when people have little time, money, or food – every decision about the best way to use those resources is made with greater urgency than when such resources are available in abundance. This approach can have positive effects in the short term, but it is done at the cost of neglecting other less urgent demands. For example, when they are under pressure from urgent expenses like rent or food, people can neglect routine maintenance on their vehicles and end up paying for expensive (and avoidable) repairs later”.

For those of us who have been lucky enough to be born above the extreme and moderate poverty lines set by the World Bank, an extraordinary effort of empathy is necessary to glimpse, even superficially, what it means to live from day to day without having the most needs covered. basic. From the comfort of a relatively predictable future, it is easy to question those poor spending and consumption decisions of the poorest. Who has not been surprised by the images of shacks and slums with satellite dishes? Entrepreneur and writer Jim Rohn put it lapidary:

“The poor have big televisions. Rich people have large libraries”.

Still true, Shah’s study reminds us that, in general, such choices are not the cause of poverty, but its consequence. In other words, people are not poor because they mismanage their resources, but poverty reduces their ability to manage them better. This change in perspective can significantly modify the focus of financial inclusion initiatives: in addition to “showing” the recipients other alternative possibilities that would provide them with greater well-being, it is necessary to understand the mental process that leads to making such decisions.

America is getting poorer. As federal pandemic aid from the spring dries up, 8 million Americans have slipped into poverty, according to researchers at Columbia University. https://t.co/VGFeRXWBry

This approach can undoubtedly raise numerous objections. We would never have those self-destructive behaviors! Even if there were a radical change in our circumstances (a perspective that terrifies most of us to a greater or lesser degree), we are convinced that common sense would come to our aid and we would use our scarce resources wisely. Since nothing is as enlightening as direct porno experimentation, and in order to help us to put ourselves in the shoes of people who live in a precarious way, the Durham (North Carolina) Department of Social Care has designed an extraordinary “poverty simulator” , which we recommend to everyone.

The program begins by reporting that Durham provides welfare to 6,000 people each year “even though you will never be one of them, will you?” It then challenges the user to prove that they can optimally manage their scarce resources for a month, without having to resort to the help of social services or third parties. Throughout a series of daily situations we are checking how many of the savings and consumption alternatives that we take for granted under “normal” conditions, do not seem to be at our disposal when we operate “in scarcity mode”.

After each election, the program inflexibly communicates to us what the likely outcome of the election will be. It is shocking to realize that making bad decisions is very easy when we do it with our mind set on the scoreboard that, on the left of the screen, warns of the little money we have left to end the month. I finished the experiment with a stomachache and with the conclusion that, in our society, being poor consumes so many resources that it is very difficult to stop being so, which is what this program really wanted to demonstrate.

To end on an optimistic note, and as an example that “difficult” is not synonymous with “impossible,” let’s recall Will Smith’s film Pursuit of Happiness, which tells the true story of millionaire and philanthropist Chris Gardner. Will Smith’s character, in a situation of extreme precariousness, living off public charity and with a young son in his care, made a series of courageous and very risky decisions with which he not only left the streets, but also became a very rich man and a benchmark of personal development. Following the reasoning of this article, it can be concluded that the decisions of the true protagonist of the story were correct because they did not reflect a mentality of poverty, but a medium-term vision that excluded the misery of living from day to day. How many people would be willing to sleep in homeless shelters while attending a multi-month training seminar, in exchange for the possibility (not security) of later landing a well-paid, skilled job? Exact. Not many.

So… social mobility is just a myth?

Well, first it’s important to know what the concept means. In this article, we will define it as the changes that the members of a society experience in their position in the socioeconomic structure. If people improve or worsen their socioeconomic condition with respect to that of their origins, then they are said to move. On the other hand, if their achievement is like that of youjizz, then it is concluded that they remain immobile. The existence of significant social mobility implies that a society can recognize and reward the effort and talent of its members.

From this perspective, social mobility and its study are linked to the analysis of inequalities and inequities in access to opportunities for well-being and development. If we consider it, what the real world shows us is shocking: people who come from poor strata will hardly be able to get out of it, for the middle classes the opportunities are very limited, and that for those born in households with high income and well-being, more likely, throughout life they will remain at that level; In other words, we are a country with very low social mobility.

Even inequality is unequal among the less-privileged strata

Data show that 48% of those who are part of the lowest income quintile remain in it throughout their lives; in other words, 48 ​​out of every 100 poor people remain in the same status intergenerationally; at the opposite pole, 52% of those who are part of the households in the highest income quintile do not move from that position throughout their lives. Only 12% of those who have completed higher education have mothers and fathers with primary schooling while 59% of those who completed a University degree have mothers and fathers with high-level training.

In terms of the wealth dimension, 8% of the people who started from the lowest quintile reached the highest quintile of the distribution. In terms of perceptions, people do not invest additional efforts in capacity building when perceiving that these do not generate long-term gains.

Mobility by gender shows that the mobility processes between women and men are unequal. Mobility is greater in women than in men. However, women also have greater certainty of staying in the lower strata when their origin is there, and fewer options than men to stay in the higher sectors even though their origin is also there.

How do you count the poor if you can't agree on the definition of poverty? India's dilemma: http://t.co/kVv3aTgdn0 pic.twitter.com/2P4a0fqDRL

The never-ending debate: poverty is a consequence or a cause?

The difficulty in explaining social mobility and its causes is not too far from the problems to account for any other social phenomenon such as inequality, poverty, or social justice. In fact, mobility and social inequality are deeply interrelated with each other in what is known as the Great Gatsby Curve: the greater the inequality, the less intergenerational social mobility. For example, if we ask anyone if they consider that there is poverty in their country, the vast majority will answer yes. People, regardless of their political or ideological orientation, are aware that poverty exists. It is a socially perceptible fact and tremendously difficult to deny.

However, when we ask about the causes of why this poverty or inequality exists and, ultimately, about how fair our society is, the plurality of opinions is triggered. Those opinions are biased ideologically, but also by social class. While the popular classes, smallholders and blue-collar workers have their opinion much more defined, with a tendency to consider poverty and inequality as the result of our unjust social order, the more privileged, middle and upper classes of white collar, don’t have it so clear. They have less confidence in how the debate on the causes of poverty is polarized, a debate sometimes raised between two possible causes, to choose one: I) People are responsible for their own actions and, therefore, for their own situation ; or II) People start from different social origins that subjugate them and condition the rest of their lives.

These privileged classes consider, in a greater proportion than the rest, that they are none of those reasons. We do not know which ones, but they seem to find the debate uncomfortable. To some extent, it is normal. Many of these people have experienced upward social mobility that has led them to improve their social position compared to that of their fathers and mothers. This social phenomenon has a particular psychological effect. These people are aware of the difficulties their parents had to go through for them to improve their social position and, being aware of their own efforts, they cannot consider their origin to be an impediment either. Therefore, compressing the debate to whether success or failure depends either on individual effort or on the constraints suffered by disadvantaged people is too reductionist.

Naturally, we turn to our memory, our trajectory, that of our family, to judge a macro sociological phenomenon that spans several generations. Any empirical result on the matter will be questioned because, after all, it ascribes us as individuals in different groups: a) privileged people who inherit the social class of their ancestry, b) people of privileged origins who have suffered a decline in the social ladder, c) people who have managed to improve their position and d) people who have not managed to improve their low social position and either have maintained it or have degraded it. It is for this reason that, in certain circles, of course, discussing social mobility at a dinner party can become uncomfortable. Talking about social mobility, understandably, supposes an exercise in critical judgment about our mothers and fathers, about the opportunities we had or were deprived of, as well as the degree of success of our own decisions.